Every new idea seems little before formulating & getting it executed. Every crazy idea seems impossible before we pause & think about it! WATSummit was one such idea which seemed impossible but working on it has made me learn & realise a lot many things in the digital world.
WATSummit 2011 – WATBlog’s flagship event was amongst the first digital events to take place in 2011 & was the largest event for the company till date. The core team was clear to have its expectations set forthright. “The Inflection Point of Digital Media” being the tagline for this first event, it actually meant to dig out opinions from thought leaders of the Indian Digital Fraternity. With a zillion digital events happening all round the year, we wished to make this one different by emphasizing on the tagline to speak for itself.
Organizing the summit has been one hell of a cherishing experience. During my tenure with WATMedia, I found this event as one of the most ambitious projects to work on. When WATSummit was ideated back in August 2010, we began with creating a website & identifying key speakers & partners who would be apt to be a part of this summit. Along the same time, content for panel discussions were brainstormed & quickly formulated to approach panelists & block their dates.
I must admit that working on the website was a task bearing the fact that my technical knowledge is pathetic! Right from preparing the content to having it placed in the right places, from designs to banners – the website was slowly shaping up. (Kudos to Kaustubhi, Krishney & Parth who did a fabulous job on designing the website & mailers). Cut to December 2010 & January 2011 which happened to be our main month for a lot of groundwork preparations, the media kit & badges were in its initial stage of design. Making sure WAT’s identity is carried on to the DAY of the event, RD (Rajiv) came up with this fabulous idea of having it shaped in a bubble (conversation mode). Below is a glimpse of the trophies which were given to our speakers along with a WATSummit diary as a momento. 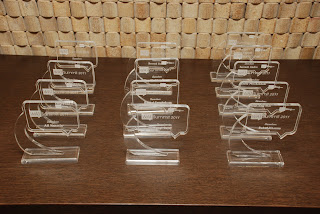 WATBlog being particular with the quality of content on its blog, we were careful about the content which would be spoken & discussed during the summit while panel sessions. As moderators were briefed about what each panel should contain as key pointers, we were happy to leave the onus of the panel with the moderator itself & treat it as his own baby.  And the bottomline for all discussions was – INTERACTIVE yet PROVOCATIVE! Our high point was receiving Mr Ajit Balakrishnan’s (Founder Rediff.com) acceptance to be the keynote speaker for the summit. His presence gave a boost to the team & also made sure that our keynote would now do complete justice to the tagline (The Inflection Point of Digital Media).
With the final day nearing, the team was working at full capacity making sure everything is in place for THE day. The hugest relief was to get the venue a day prior to the event for the setup which would have otherwise eaten into our time on the day of the event – 14th Jan 2011. Not to forget, since I was to host the conference, a script was simultaneously being prepared!
I vividly remember the night before the event was sleepless – full of excitement & anxiousness!
14th Jan 2011 – With the organizing team reaching early & making sure all arrangements are done, we were all set to roll. I began with welcoming our attendees & thanking our sponsors. 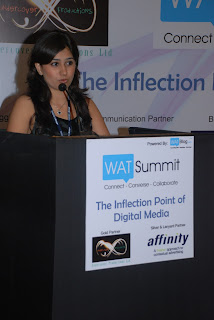 All the panel discussions followed smoothly & the venue was packed till the end. The highlight amongst all the panels was our 4th panel – Startup vs VC Perspective. The moderator – Mr Alok Kejriwal (Owner & Founder - 2win group) was at his wittiest best & that gave the panel an instant uplift. All the panel discussions saw interactive Q&A sessions from the audience. It is generally seen that the audience doesn’t sit till the end of any conference but we were pleasantly surprised to see a full house till the end of our summit.
Learnings: I wouldn’t say that we as a team didn’t face any hiccups. Sure we did but there was mostly a plan B attached to it which made it easy for the team to function. Also, three days before the event, a responsibility sheet with a timeline was prepared which sorted each person’s position at the venue to avoid confusion. Finally, no event is executed by a single person – Team Work it is! What an experience its been for all of us working on it! Kudos to all of them - Rajiv Dingra, Jason Menezes, Kaustubhi Kale, Krishney Asnani, Parth Mistry, Ruchi Mehta & Dixita Soni.
A successful team is a group of many hands but of one mind.
-          Bill Bethel 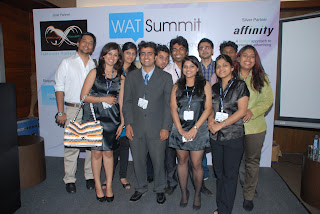 On that note, here’s a preview of the snaps of the event - http://bit.ly/watsummit2011

Hope you guys have a good time reading this post. With the opportunity given to me of working on some of the best upcoming Digital Events in India, I shall make the best out of it & share the experience of making these events come LIVE.

Namita Ved
Travelling I love, Foodie I am, Gyming I hate, Shopping I avoid, Idle I hate being, Inspiration I need, Talkative I’m described as & Love is what keeps me going. PR is what I've studied & closely follow but Events is my passion. Digital Media is the industry I come from & Communication is my core strength!